What is the Best Dog Tie Out Stake for Large Dogs?

Getting the best dog tie out for your dog is important!

A large dog owner understands the power and strength that comes along with having a large dog.  In fact, most large dog owners have most likely been through many dog tie outs claiming they can hold massive weight limits.  Most Large dog owners will laugh at a ground anchor system for their large dogs... Until NOW! 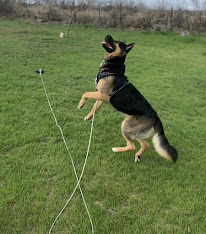 Let me shoot it to you straight, as a large dog owner myself, you can have the strongest steel stake all you want, but the dog will figure out how to work it out of the ground. There is only one dog tie out system that will hold TWO Large Dogs at a time with ease- the Double Dog Run System is hands down, the best dog tie out for large dogs holding 1200 lbs of Pull Force.

A large dog tie out needs to be secure and safe for the dog and those around them.

Here are some tips when looking for the best tie out for large dogs:

The facts are that most dog tie outs are tested only for a weight limit, NOT for pull force. When a dog tie out is only tested for a "weight limit" it only tells you how much static (still) weight it can hold. There are no considerations made for a moving animal with power and strength. There are also no considerations made for something constantly pulling.. and pulling- like most dogs do when they want something crossing their path. When you see the words "weight limit" it is NOT the same as the PULL Force Weight Limit which is substantially more important.

When a dog tie out stake is tested for both weight limit AND PULL FORCE, it has been tested to withstand large amounts of force when a dog or multiple dogs pull on the ground anchor at high speeds. It is also tested on the force it can take on by a constant pulling and jolting from a dog trying to get the rabbit across the yard.
Learn more about Pull Force in our article on Understanding Pull Force and Weight Limits
End of the day- Just because something says it is a "bestseller" does not make it the best dog tie out, especially when it comes to large dogs. Check out our straight forward article on Comparing Dog Tie Out Stakes - Bestseller Does Not Always Mean the Best
If you really want the best dog tie out stake for a large dogs check out DoubleDogRun.com

Is a Collar or Harness Better for My Dog? (UPDATED 2022) - Walking and Dog Tie Out Stakes 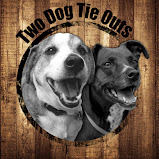 There are a number of suggestions across the board for whether a collar or harness is better for dogs.  Some trainers and websites advise that a certain type of collar is best and others say that a harness is best... So, now what do you do? Let's look into this further and help you figure out if a collar or harness is best for your dog.   Are you walking your dog on a leash; or will your dog be using a dog tie out? Using a Harness or Collar when Walking Your Dog: Using a a harness for walking has become general practice, but not all dogs need a harness .  For example, if your dog is trained and walks like a champ, you don't need a harness, a collar will do just fine. However, if your dog needs to get used to walking on a leash, then a harness may be better when on walks through the park.  This will eliminate your dog from basically gagging itself and hacking down the trail through the park.  Training your dog to use a collar should be your ultimate goal.  A harness is great
Read more 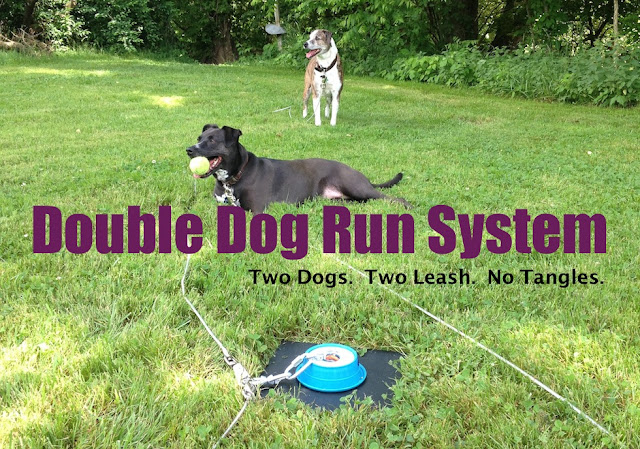 Double Dog Run System is coming into the  Fall of 2015 with a bang! We have expanded our sales to Amazon.com in the U.S. and are moving onto Amazon Canada! Double Dog Run Amazon As we move toward another year of dog Tie out sales- we want to thank all our customers for all their kind words and great Testimonial! Here are few that we love: "A must for dog owners!!! By far the best purchase I've made for my dogs so far!! They get to enjoy running around the yard and playing like a bunch of crazy fools....AND I get to keep my sanity that I was losing from them ALWAYS getting tangled. The only downfall of the system...this amazing product has turned my dogs into cry babies who never want to be in the house anymore!!!"     -Melissa M. - via Facebook     "We just received our system in the mail and I was able to set it (almost) all by myself in about 10 minutes and my dogs are SO HAPPY!!!! They get to go out together and play and run in the yard and h
Read more Got Dogs and No Fence?  No Problem! There are many situations where pet owners are faced with the situation of needing to find alternative solutions to a fence for their pets, specifically for dogs.  Additionally, the cost of installing a fence, plus materials can be way out of budget for some dog owners. So, what do you do when you don't have a fence?  Well, we sat down with Kim Wherley of Infinitely Tied, LLC to discuss the revolutionary two dog tie outs they invented, patented and currently manufacture. J oin us as we interview  the Inventor of the Double Dog Run, Tangle-free Two Dog Tie Out , Kim Wherley; and learn more about the best alternative to an electric fence or building a fence for your dogs! It's morning, about 9am, and I am just sitting down for coffee with Infinitely Tied, CEO, Kim Wherley.  She appears very relaxed in her backwards baseball cap and dressed very comfortably in her jeans and sweatshirt. She comes across confident, but also quit content in her li
Read more

Two Dog Tie Outs
Have two dogs or more? As the experts and inventors of the U.S. Patented Double Dog Run System, we are her to help you to understand our products; and, in the near future, other dog products we recommend. We will be posting dog product reviews, tips for dog owners, and more! Our specialty, however, is dog tie out stake systems. What is the best dog tie out system for two dogs? The Double Dog Run heavy-duty, anti-tangle dog tie out stake can handle one or two pets of the same or opposite size for small to XL breed dogs.